What is Responsive Design? 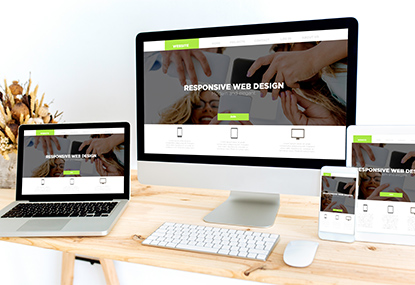 If you're looking for a re-design or an entirely new website, there's a good chance you'll come across the term 'responsive design'. But it's not always guaranteed that anyone will explain exactly what it means.

Why Responsive Design is needed:

The first websites were designed to be viewed on a desktop computer or laptop. And for many years, that approach was fine. As long as your website worked properly in the main internet browsers (e.g. Internet Explorer, Firefox and Chrome), it was fine.

That's been changed by smartphones and tablets. In 2015, the smartphone has overtaken the laptop as the most popular way to get online in the UK. Two thirds of the population own an iPhone or Android handset, and spend an average of almost two hours every day using the internet and applications.

When the internet first became accessible on your phone, the answer for big companies was to create a new website specifically for small screens. The mobile versions were often developed separately, stripped out many of the features of the main site, and then had to be maintained and updated.

Making mobile phone applications can be just as complicated. Not only can they be expensive, but each platform requires different features. And with the average smartphone owner regularly using just five apps, most will end up ignored and deleted.

What Responsive Design Does:

Responsive Design creates websites which adapt to the device your using to visit them. So the layout and images will change to make it easy to use on your desktop, tablet and smartphone.

Not only is the UK predominantly a country of smartphone users, but more than half of the internet traffic worldwide is from mobile devices. And Google now indicates mobile-friendly websites, effectively penalising those which aren't compatible.

Essentially, a responsive website sends out a question to the device and internet browser to find out what they can handle, and then supplies the most appropriate version of the website.

And that has a number of business benefits:

Now is the time to upgrade to Responsive Design:

2015 really is the time to upgrade to a Responsive Website. The smartphone is the most popular way for people in the UK to access the internet, and more Google searches take place on mobile than the desktop in a number of countries (Including the U.S and Japan).

Google is already recommending websites with a responsive design via a 'mobile-friendly' icon for anyone searching on their phone. Google's own documents refer to responsive design as best practice, and non-mobile compliant websites are now warned directly that they should be accessible on all devices in the future.

You can still built a business without a responsive website, but it's becoming harder and harder. Do you want to be turning away 50% of potential customers for what is now a relatively small cost to upgrade?