Shops and retailers should be well aware of the power of Pinterest by now. A study in 2015 showed 93% of users were planning future purchases on Pinterest, and 87% actually buying something they’ve seen on the site. But does Pinterest get more customers into shops?

It can be difficult to track whether an internet promotion also meant more people came to visit your business in person. But a recent study of 26 Promoted Pin Campaigns drove five times more incremental in-store sales per impression compared to advertising elsewhere. And while advertising is generally more focused on raising awareness, anyone who engages with Promoted Pins is 12% more likely to be a buyer of that brand.

It’s still a relatively small study, but it shows the increasing impact that your digital presence has on your physical outlets and stores. Having a strong website, SEO and Social Media presence isn’t just about attracting geeks and techies – almost everyone has a smartphone and will use it to find the businesses located near them at any time.

If they can’t find your location via Maps and Search, then they’re far more likely to look and ask for recommendations on Social Media, whether that’s Facebook, Twitter, or Pinterest. 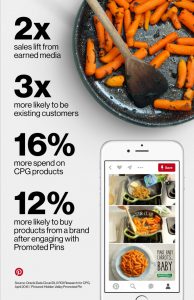 Increasing your Pinterest traffic isn’t difficult, but it does require some attention to detail. Beyond paying for Promoted Pins, the main ingredient is to have fantastic photos.

You don’t need a professional photographer, but you do need to take a little time before snapping something with your smartphone. Is it somewhere with reasonably light? Do you want an interesting background? Could the image be better if you grouped two or three photos into one overall image?

Generally longer images work better on Pinterest, particularly when they have text overlaid on them. There are a huge range of free tools available for quick and easy image editing, so it’s a case of finding whichever one you find easiest to use.

And finally for these quick Pinterest Traffic tips, make sure you post and get involved in liking and following other people and boards on a regular basis. Little and often is the best way to build up your traffic, rather than adding a lot of products and then forgetting about them. It also means you’re more likely to take the time to add a good optimised description to each Pin to help it to appear in search results. Great images have never been more useful to boost interest on Facebook, Instagram, Twitter etc, so it makes sense to put the main image-sharing site as a cornerstone of your strategy if you’re a retailer or product manufacturer.