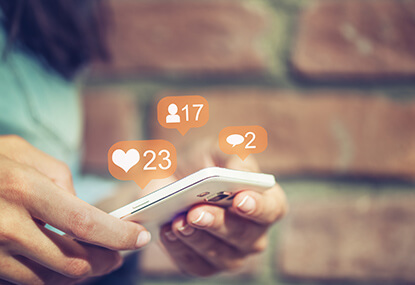 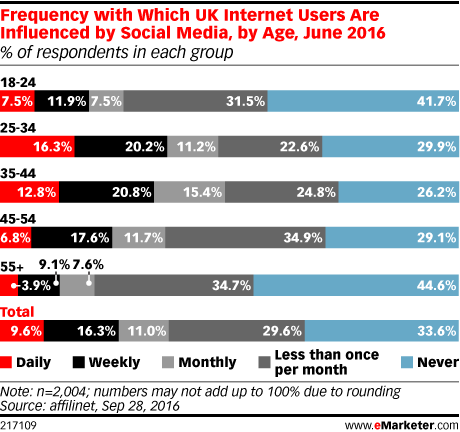 You've probably seen the huge numbers of people regularly using social media in the UK. In 2016, the latest figures suggest around 35-38 million people are active on social networks. Facebook remains top with more than 31 million UK users, and Twitter gets the attention of more than 15 million in the United Kingdom. That's before taking into account the rise of Instagram, Snapchat and other networks. But how often does social media influence UK internet users? 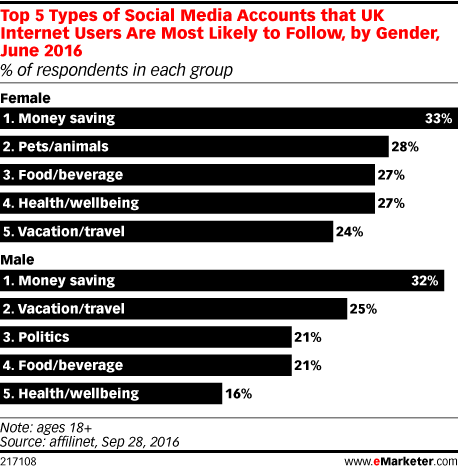 To answer that, eMarketer has published a survey conducted by affilinet which makes for interesting reading.

People from the ages of 18 to 55+ were asked whether social media regularly influenced them, if it was rare, or whether they weren't influenced at all.

As you can see, the responses were quite different depending on the age groups. Those claiming to be least affected by social media were either under 24, or over 55+. Even then, between 60-70% of each age group admitted to being influenced occasionally by social media, and around 20% said it was on a daily or weekly basis.

Between 25-55, far more people admitted being influenced by social media, and on a far more regular basis.

While it's possible people could either overestimate or underreport the effect social networks have on them, the survey also included some interesting information on the types of accounts UK users are most likely to follow.

For both male and female internet users in the UK, money saving is the biggest attraction to follow a social media account. The only real difference is that female social media users are more likely to be interested in pets and animals, while the males claim to favour politics - although the order is different, the remaining topics are identical.

So there's a definite need to include ways for people to save money as you build your company on social media. That can be promotions, special offers, or general industry advice, for example. If you need more ideas for building the social following for your business, then we're happy to offer more suggestions.