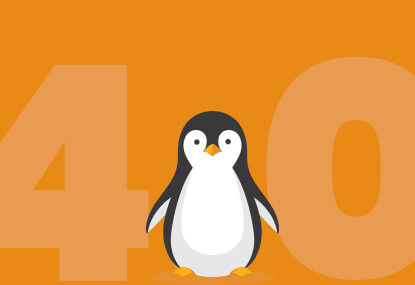 In the last few days, Google has confirmed that its latest algorithm, called Penguin 4.0, has been rolled out.

Two years after its last update, the Penguin algorithm will make drastic changes to the way sites are viewed and ranked by Google. How will this affect your website you ask? If it's designed properly and features unique content, you're actually likely to see improvements in search positions rather than drops. If your site utilises black or grey hat SEO methods, prepare for sudden and potentially drastic falls.

The initial Penguin update, released in April 2012, was aimed at catching sites that spammed the search engine results. Especially those that used link schemes to manipulate rankings on Google and the other search engines. The way the algorithm worked meant that it was able to hunt down inorganic links; i.e. the ones bought or placed solely for the sake of improving search engine rankings. Before this algorithm, bad links were just devalued and needed to be replaced in order to recover dropped search rankings.

However, after Penguin, these bad links became toxic and required a link audit and the removal of spammy links. A Penguin refresh was usually required before any signs of recovery could be found. This could often take quite a while. However, this is one of the things addressed in the Penguin 4.0 update.

What should we expect from Penguin 4.0?

There are two huge improvements to the algorithm; real-time ranking changes and granular ranking movements. Before Penguin 4.0, sites were only periodically refreshed and re-indexed at the same time. In an official statement, Google clarified what this would mean for authentic sites;

Once a webmaster considerably improved their site and its presence on the internet, many of Google's algorithms would take that into consideration very fast. However, others, like Penguin, needed to be refreshed.

However, thanks to the 4.0 update, this will now happen in real time. Any changes now made will be carried out as soon as the affected page has been recrawled and reindexed, meaning a more reliable and accurate way of monitoring a website's search engine ranking. There will be less dramatic changes and fluctuations too, which is great news!

Penguin 4.0 is also more granular now too. The algorithm will now devalue spam by adjusting search engine rankings based on spam signals, rather than affecting ranking of the whole site. Any penalties will now be delivered to a specific page rather than an entire domain, which is much fairer in the long run.

Both of these aspects of the Penguin 4.0 update should have a positive impact on the genuine websites and domains out there. Based around quality, fresh and unique content, this update is set to boost well written and designed websites. It should also punish those that use black hat practices in their SEO.

If you are unsure about how this Penguin 4.0 update might affect your business, speak to the experts at Smart Domain Group. We offer helpful and impartial advice and will provide you with a free website review if required.