Chatbots: The Future of Marketing? 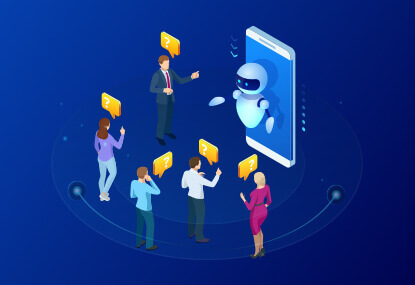 The Twitter account of a new artificial intelligence chatbot from Microsoft has been making headlines this week. Since being launched, Tay has been plagued with problems. Built to communicate with millennials (those born between 1980-2000), the chatbot is supposed to learn through conversation, but has instead repeated racist and sexist content before suffering a major meltdown.

But despite the high profile teething troubles for Tay, chatbots are poised to be the next big marketing tool. In addition to Microsoft, the likes of Google and Facebook are also investing a lot of time and money into developing their own services, and providing tools for third parties to introduce their own chatbots. But why the sudden interest?

The Rise of Mobile and Chatbots:

The huge rise in mobile internet use has sparked the renewed development of chatbots, powered by either prepared scripts or artificial intelligence. Huge numbers of us are using mobile messaging apps every day, including Facebook Messenger, WhatsApp (also owned by Facebook), WeChat, Kik and more.

Businesses are now looking to reach people within these applications. Facebook Messenger now has more than 800 million active users every month, with WhatsApp reaching more than 1 billion users in February 2016. The result is a huge audience spending hours within mobile apps entirely based around conversation, whether you're sending text, images, gifs or emojis. In Asia, the dominant WeChat and Line messaging apps allow for official chat bot accounts which let you make purchases, order a taxi, buy cinema tickets, and pay bills all via messaging.

Facebook previously launched the M Assistant, which is the official artificial intelligence app for Messenger. Similar to Siri on Apple devices or Cortana for Windows, it's been joined by the ability to order an Uber taxi. And in January, Facebook started sharing an official Chat SDK (Software Development Kit) for selected third party advertisers. Meanwhile business tools such as Slack have used chatbots to help people sign up to the service, and could allow you to book and pay for business services without visiting an external website.

Do you need your own Chatbot?

At the moment, only the largest brands targeting customers under 30 are likely to see good results from investing in their own chatbot systems. It will take time for a wider range of people to become comfortable with the idea of purchasing products and services through messages, rather than selecting what they want from a website, or phoning up with their orders.

But given the huge number of people in the UK who use their smartphone as their main, or only, internet device, and the fact that so many of us are using Facebook Messenger, Whatsapp or alternatives every day, it won't be long before Chatbots are as much as part of everyday marketing alongside Email, SEO and Social Media.